Rabbi Mordechai Gutnick is Australia's pre-eminent posek and the leading Chabad Rabbi in South East Asia. He is also acknowledged as one of the leading experts in the field of Kashrus and has been called upon to represent the Jewish community when Government challenges to shechita and kashrus have arisen in the past few years and has been instrumental in resolving these challenges.

Rabbi Gutnick received his semichah in 1972 in New York and, during his three-year post-graduate studies at the Kollel Avreichem Lubavitch in New York, he was appointed an outreach lecturer for the Committee for Furtherance of Jewish Education based in New York. In that role he visited and lectured in many communities throughout the USA and Canada. He also helped found, and was a senior lecturer and counsellor at, the Machon Chana Institute for the Study of Judaism, also in New York.

He received further post graduate Rabbinical qualifications from the Rabbinical College of Canada including the qualification of Dayan entitling him to sit as a judge on the bench of a Jewish Religious Court. While there, he received practical training in matters of Jewish law and Kashrus supervision from the Av Beth Din (Chairman) of the Beth Din of Greater Montreal, Horav HaGaon Rav Pinchas Hirshprung zt"l as well as other renowned rabbinical personalities.

In 1975, Rabbi Gutnick returned to Australia to take up the position of Rabbi of the Strathfield Synagogue in Sydney and Rabbinic Director of the NSW Kashruth Administration Committee, a position that entailed supervision of shechita, catering and food establishments and the investigation and certification of Kosher products on behalf of the Sydney Beth Din.

In 1977, Rabbi Gutnick was appointed as a Dayan of the Sydney Beth Din and in 1981, upon the reorganisation of the Beth Din and its activities, became the initial Rabbinic Administrator of the independent NSW Kashruth Information Bureau.

In 1982, Rabbi Gutnick was appointed as senior Rabbi of the North Eastern Jewish Centre  in Melbourne. During his tenure there Rabbi Gutnick independently supervised and certified a number of caterers and food establishments.

In 1996 Rabbi Gutnick was appointed as Rabbi of the Elsternwick Synagogue and as Rabbinic Administrator of Melbourne Kashrut (which subsequently became Kosher Australia). Melbourne Kashrut was formed from the amalgamation of a number of independent Kashrus organisations that had existed until that time.

In 2002 Rabbi Gutnick joined his father, Rabbi Chaim Gutnick z"l as co-Rabbi of the Elwood Talmud Torah Congregation and in the following year was appointed Senior Rabbi upon his father’s retirement.

Also in 2002 Rabbi Gutnick was appointed as a Dayan on the interim Melbourne Beis Din during its period of reorganisation and subsequently became Senior Dayan of the reconstituted Beis Din in 2004.

Rabbi Gutnick has been a member of the Executive of the Rabbinical Council of Victoria continuously since 1982. He is the Past President of the Organisation of Rabbis of Australasia, having served a five year term from 2003-08 and for many years was a Jewish Chaplain to the Australian Defence Forces, Southern Command.

Rabbi Gutnick is the current President of the Rabbinical Council of Victoria (2014-).

Rabbi Gutnick has written numerous articles in English, Hebrew and Yiddish on Halachic and general Jewish topics which have been published both in Australia and elsewhere. He has appeared on local radio and television, including regular weekly sessions on local Jewish radio programs. He is also a popular speaker and has lectured extensively in Australia on Jewish law and ritual. He has spoken on numerous occasions in Israel, the USA and Canada. 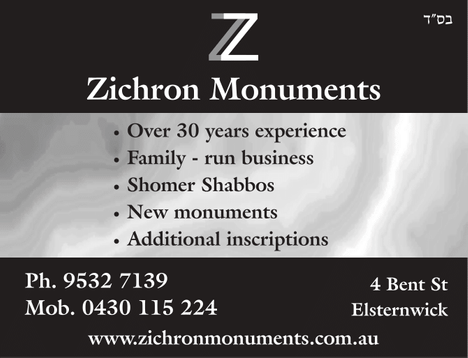